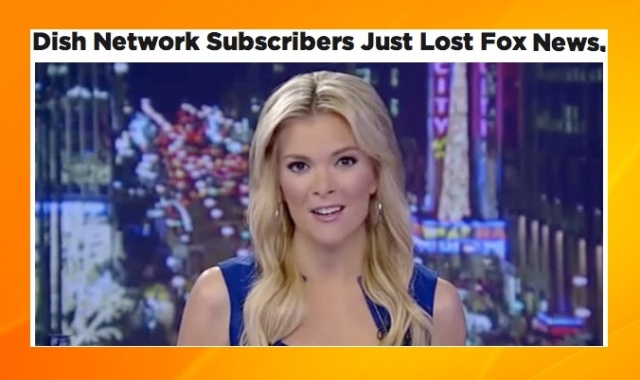 Contract negotiations between TV networks and cable and satellite providers have been growing increasingly contentious and this week more networks have gone dark in the middle of a carriage war. Now, it’s horrifying news for many Dish Network subscribers. Fox News Channel and Fox Business Network have been pulled this weekend after the new contract negotiations totally faltered.

“This is torture,” griped one subscriber. “Where are my news babes? OMG! Brian Williams? Scott Pelley? Rachel Maddow? Who are these unattractive men? I want my blondes and I want my news cleavage.”

According to a Dish spokesman, Fox is holding their 2 most popular channels hostage, while renegotiating contracts for other channels that their main audience does not care about. “We have been fielding phone calls all day from despondent and desperate middle aged white men, so believe me, we realize the severity of the situation,” he added.

“Give them whatever they want,” pleaded another viewer. “I am beggin ya! I’ve been watching CNN and ABC news for only one day and I feel like my head is going to explode! I’m getting information, pictures, editorial comment, 2-sided discussions. Reporters are looking at topics from all angles. It’s crazy! I need a support system. I spend all day thinking. The last thing I need to do at night is be forced to figure out what all this information means. I need to be told and I need it to be told by a pretty gal, preferably a double D! That’s not asking much. I mean really, without them they can’t really call it the Dish network!”

This entry was posted in GTK, Scoop and tagged #dishnetwork, #foxnews. Bookmark the permalink.