Vatican Besieged By Thousands Who Refuse To Do Their Jobs, Begging For Papal Audience! 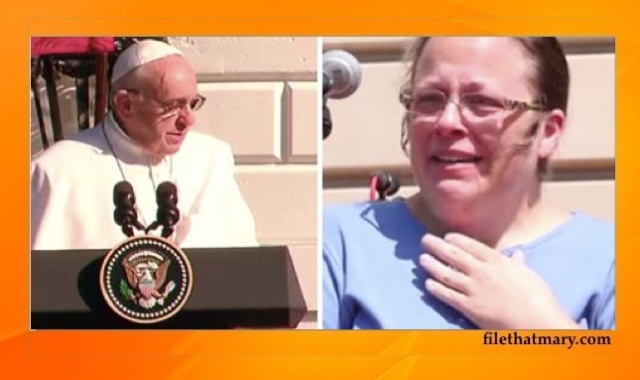 With reports appearing to confirm that the Pope had a private meeting with The Elizabeth Taylor of County Clerks, Kim Davis, it appears that everybody wants to get into the act. Monsignor Gianaitto Felatto, the Pontiff’s personal appointment scheduler has been inundated with requests for similar tete a tetes with job slackers from around the USA. “Is unbelievable!” said the Monsignor, in a visible sweat, attempting to make sense out of the Pope’s online and iPhone calendars. “Everybody want to meeta the Pope instead of doing their job. I told him it was a bigga mistake. But he said I like her spunk and “that hair reminds me of mi madre.” “And now I gotta take another damna software update!”

Reportedly workers around the nation,from plumbers to sanitation workers, Best boys to grips, artisanal bakers to personal decorators are claiming they have objections to doing parts of their job and they know the Holy Father will understand and maybe throw in a free rosary. Operators handling the influx of calls to the Vatican’s conscientious objectors hotline, have threatened a walkout if the situation isn’t quelled. Maria Quatriocchi, one operator exclaimed, “they are just so demanding and may I say, so self-righteous! Is stupido! Do ya damn job!” she exclaimed while gently blessing herself. “And that Huckabee guy…Che palle!”*

Updates neither confirming nor disavowing this story to follow.

*english translation “What balls!” “What a pain in the ass!”

This entry was posted in International, Scoop, Whores and Horrors and tagged #kimdavis, #Popefrancis. Bookmark the permalink.